Kaguya Wants to Take Him Out 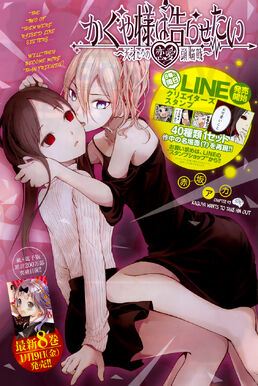 I Want to Make Kaguya Blush

Kaguya Wants to Take Him Out is the ninety-third chapter of the Kaguya-sama wa Kokurasetai manga series.

Ai is tasked to prevent Miyuki from talking to girls.

Shirogane decides to join Kazamatsuri and Toyosaki for a karaoke group date, that they describe as a networking event.

After arriving, he notices that "Haski" (Hayasaka in disguise) is there. Having previously declined a date with her it gets awkward. They get into a conversation about how he likes her better when she isn't doing a persona (or at least, less of a persona).

Kaguya ordered Hayasaka to make sure no girl tries to get close to Shirogane. Hayasaka, still being mad because of the earlier incident with the Haski-persona decides this is her chance to get closer to him herself.

Using Shirogane's limited knowledge of group dates to her advantage, she ensures she and Shirogane sing karaoke together. However, after Shirogane reveals one of his weaknesses (rapping) she quickly leaves, not being able to handle his horrible rapping.