I Want to Make Kaguya Blush 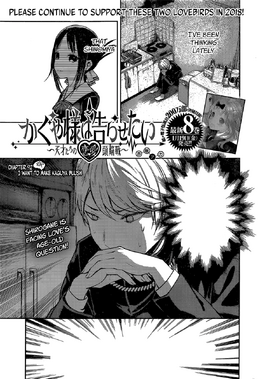 Kaguya Wants to Take Him Out

I Want to Make Kaguya Blush is the ninety-second chapter of the Kaguya-sama wa Kokurasetai manga series.

Miyuki wants to assess Kaguya's feelings for him.

Shirogane knows that Kaguya likes him, but he's worried she's not interested in him romantically. He wants to assess if she's only interested in him as a friend or as a love interest. He starts by "accidentally" touching her under the disguise of helping her.

Kaguya manages to keep calm (on the outside) due to her ritual. Shirogane, getting increasingly worried that she really doesn't like him in a romantic way, starts complimenting her. After this, Kaguya starts complimenting Shirogane and calls him "nice". This worries Shirogane, as he believes women don't like nice guys and only see them as friends.

In the end, both end up happy and both win.