Fujiwara Wants to Go On a Trip 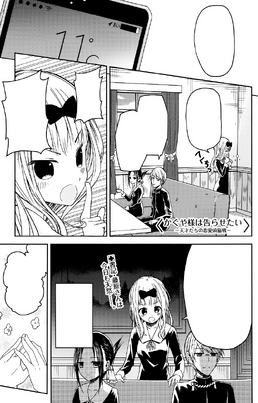 Kaguya Wants to be Answered

Fujiwara Wants to Go On a Trip is the seventh chapter of the Kaguya-sama wa Kokurasetai manga series.

Chika suggests a trip for summer vacation. Disputes between Miyuki and Kaguya occurs regarding the location for the summer trip.

Retrieved from "https://kaguyasama-wa-kokurasetai.fandom.com/wiki/Chapter_7?oldid=8607"
Community content is available under CC-BY-SA unless otherwise noted.