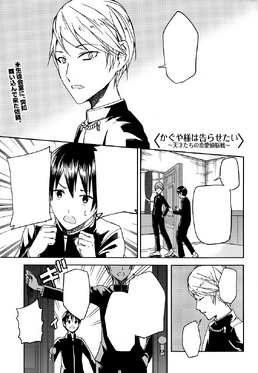 Fujiwara Wants to Go On a Trip

Miyuki Shirogane Wants to Hide is the sixth chapter of the Kaguya-sama wa Kokurasetai manga series.

Miyuki got asked from his classmate for a love advice regarding feelings and confession.

The chapter starts with Tsubasa Tanuma asking Miyuki Shirogane for love advice. Tsubasa is confident that Shirogane can help because supposedly he has been in over a 100 battles of love. Shirogane accepts Tsubasa’s request and asks him to come in while worrying about how he’ll advise him since he has no relationship experience. He worries what will happen if he is outed for having no relationship experience so he musters up the resolve to weather through this. He tells Tsubasa that he has never been rejected.

Kaguya overhears their discussion and thinks that this could be a good chance to find out Shirogane’s views on love, so she quietly listens. Shirogane asks Tsubasa what he wanted to ask him about. Tsubasa tells him that he wants to ask out a girl in his class named Nagisa Kashiwagi. Tsubasa thinks that she will turn him down so he’d like to build up their relationship first, which is what he wants to ask Shirogane about. Shirogane asks him what his current relationship with her is, Tsubasa says that she gave him 3 chocolate balls for valentines and suspects that those were just obligation chocolates. Shirogane nervously claims that she has a thing for him. Kaguya questions this while overhearing it. Shirogane says that women are dishonest creatures, so you should always assume they mean the opposite of what they say. So at first glance, those obligation chocolates are actually love chocolates.

Tsubasa is unsure of that, since the other day she asked him if he has a girlfriend. He said no and then Nagisa jokingly told her friends about it. He says that they were just teasing me. Kaguya agrees, and that none of them were even considering him while overhearing them.

Shirogane says that he is popular. He questions why Tsubasa doubts women so much, saying that they are human just like him. It’s very simple to understand what is being said while giving alternate meanings to what the Nagisa said. Tsubasa says that he couldn’t just pick one of them, Kaguya thinks he is an idiot while overhearing them. He asks Shirogane if he goes out with

Nagisa, does he think that she won’t be able to be friends with the rest of her friends anymore? Shirogane says it’s possible, but it is okay since she’ll have you. Kaguya thinks that it is horrible advice. Tsubasa says that he doesn’t know how to ask someone out since he has never done it. Shirogane demonstrates by telling him to imagine a girl in front of the door, and he slams the door and asks if she will go out with him, just like that. Kaguya, who was on the other side of the door, was shocked and flustered. Shirogane calls it the Kabe-daan, which makes Tsubasa call him a genius. Kaguya thinks that Tsubasa is braindead. Tsubasa says that he sees why Kaguya would fall for him.

Shirogane tells him that they aren’t dating. Kaguya, while overhearing the discussion says that’s right as if she would fall for him. Tsubasa is shocked by this since from the outside it looks like that. Shirogane says that lately, he feels that it has been the opposite, and he has started to feel as if she hates him. Kaguya is shocked by this, wondering if she did something.

Chika is walking to the student council room when she sees Kaguya by the door and asks what she was doing.

The very next day, Tsubasa asked Nagisa out and she accepted.

The chapter ends with Kaguya giving the president tea.