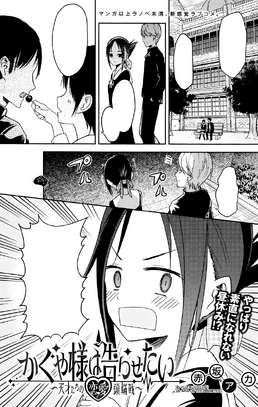 Kaguya Wants to Eat is the fifth chapter of the Kaguya-sama wa Kokurasetai manga series.

Kaguya discreetly tries to have a taste of Miyuki's boxed lunch.

Shirogane and Kaguya are walking around campus and saw a couple feeding each other with a toothpick with a treat. Kaguya reacts saying its lewd or improper. Returing to the student council room Shirogane asks Kaguya if she's still disgusted or mad of what they saw. The scene they saw made Shirogane hungry and took out his bento. For the first time in Kaguya's life she saw such a delicious meal to be cherished and treasured. Seeing that Kaguya's food is always made by professional chefs she never saw such a sight of normal food. It is a meal Kaguya never knew and Shirogane's bento is all about the cravings and not for nutritional value. Kaguya wanted to eat that octopus shaped wiener. But her PRIDE would never allow it. The council secretary, Fujiwara Chika joins in and asked about Shirogane's meal and is given an octopus wiener. Kaguya seeing Chika eating off Shirogane's bento made Kaguya into a death stare. A hypocrite lecherous creature who only lives off to others. Shirogane saw Kaguya's stare and mistakes it as Kaguya judging how pathetic his bento is. Shirogane puts out a cup with hot miso soup to counter such disgust (mistaken by Shirogane because Kaguya is disgusted at Chika's eating out of Shirogane's bento) to his bento. Shirogane teaches Chika the art of hot miso soup and rice mixed to make a perfect taste. Chika then eats of the same parts Shirogane ate from and Kaguya saw the indirect kiss to herself. Chika is amazed by the taste . The day ended with Kaguya being more resentful to Chika and Shirogane mistaking it as his meal is stupid.

The next day starts Kaguya showing her meal saying her chefs got a little to exited and cooked a mega bento filled to the brim of delicious foods. Kaguya thinking that Shirogane will ask for some thinking an exchange may happen. Shirogane and Chika brought out their bentos. Kaguya saw her most awaited sight the octopus wiener. Kaguya in a dark demeanor introduced her oysters to Shirogane much to Shirogane's fear. Thinking that Kaguya is pitying Shirogane's bento. Shirogane declines because he cannot repay in any way even in trade. Kaguya dropped down thinking that she just wants that octopus wiener. Kaguya recovers and asked about Chika's bento. Chika replying Shirogane made it for her. Kaguya's mind is full of insults to Chika and her demeanor saying she is a cattle and a leech. Kaguya's glare is again noticed by Shirogane seeing it as Kaguya trying to kill them in her mind. Shirogane eats his bento quickly in an excuse of a meeting. Shirogane ran out with Kaguya in a state of decay. Kaguya thinks to herself that she is a fool. Chika then gave an octopus wiener to Kaguya. They ate togther and Kaguya said aloud the Chika does have a soul. Results of this battle, Kaguya's victory because Shirogane retreated.