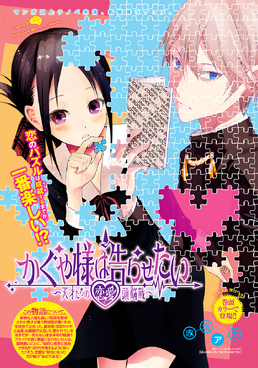 Miyuki Shirogane Wants to Answer is the fourth chapter of the Kaguya-sama wa Kokurasetai manga series.

The chapter starts in the Student Council room, with Fujiwara asking to Kaguya to solve a riddle she found in a magazine called Brain Teasers, which she does easily. Shirogane questions the logic behind the teaser in his head, and when Fujiwara coincidentally explains the logic the magazine used, he is only more confused. Shirogane is inwardly baffled when Fujiwara says it took her no time to solve it, and moves on to another riddle, which Kaguya also nails. Shirogane then reassures himself, thinking about how he wasn't giving it his full brainpower, and decides to give the next one his all, only to backtrack once Fujiwara announces the problem. Kaguya then gives the correct answer.

Fujiwara then invites Shirogane to join them in the game who, after considering the possible outcomes, decides to stay out under the pretense that he is studying, which he was all along. Kaguya then vouches for him, saying that the games are just a distraction and "only an idiot wouldn't be able to solve them". This silently infuriates Shirogane, who takes it as an implication that questions his intellect, and leads him to decide "crush' Kaguya in puzzle-solving.

Fujiwara launches a barrage of questions, all of which Kaguya solves with amazing speed, leaving Shirogane to bite the dust. Kaguya then complains that her speed and ability in these always discourage others from competing with her, and she laments to herself that she had to use this to shame Shirogane and discover his weaknesses. Shirogane then leaves the room in shame, calling himself a primate and a dumbass for not being able to compete with his love interest.

One week later, in the same location, Fujiwara proclaims to Kaguya that she brought the new issue of Brain Teasers, and she starts spelling out the first question. However, before Kaguya has a chance to respond,a decrepit-looking president barges into the room and delivers the answer. It is then revealed that Shirogane spent the last week revising previous Brain Teasers volumes and building strategies. He then proclaims in his mind that he is a genius, and collapses in the Council Room's floor.

Retrieved from "https://kaguyasama-wa-kokurasetai.fandom.com/wiki/Chapter_4?oldid=10509"
Community content is available under CC-BY-SA unless otherwise noted.