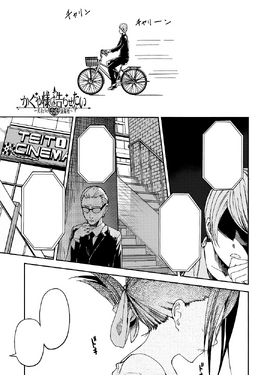 Kaguya Doesn't Know Much is the third chapter of the Kaguya-sama wa Kokurasetai manga series.

Miyuki is seen cycling towards the local theater whilst scouted by Kaguya's guards. While Miyuki is seen arriving in the lobby of the theater Kaguya played the act of coincidence. Kaguya dismisses her guards. Miyuki then claims that maybe Kaguya is waiting for him but Kaguya said in reply that's just his ego. Kaguya then tries to enter the theater using her voucher but little did she know she needs to exchange it for a ticket. She goes to a food and drink to exchange which is wrong too. She then found the lobby which is the correct one. Miyuki is thinking why is she just standing there he thought they were going to exchange the voucher at the same time. When its her turn to exchange the voucher she is then asked what assigned seat she would like. She panics and doesn't know what that is since she is a sheltered girl. Miyuki showed his ticket to give a hint on Kaguya instead of teaching her and saying his seat number since he thought it would make him look desperate. The nearby mascot Twelve Penguins (his ticket is G12). Kaguya confuses the letter and number for Pentane. Kaguya picked H12. Kaguya was then one seat behind Miyuki. It ends with Miyuki giving Kaguya some Popcorn. Todays result, both lose because of Kaguya being so sheltered.