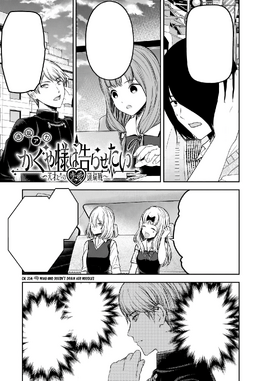 The Student Council looks for the best way to enjoy yakisoba.

The chapter starts with everyone telling their progress and position with Chika and Hayasaka heading towards Kyoto in a taxi.

Since Chika is safe with Hayasaka, the rest of them decide to stay together for the night to be safe. They are going to spend the night in the student council room.

Shirogane tells them that it is fine to use the room as it is an extraterritorial enclave owned by Phoneix Society, which means it is not even the school’s property.

Ishigami gets hungry and wants to order some Uber Eats, but Shirogane tells him not to do that as he has got some instant yakisoba with him. Shirogane heads first to make his share. However, Ishigami is shocked to see what he is doing.

He sees that Shirogane is putting in bean sprouts and sausage together, telling that it tastes better this way. This helps you in getting some bonus veggies and protein with the yakisoba.

We get to know that Beyoung Yakisoba is a famous brand, and gourmands all around Japan have long debated about the method of preparation that will yield the ultimate flavor.

Ishigami says that he likes to add in the condiment packet behind the noodles, and to drain the water, he uses sky soba smash. Iino now enters the arena pitying the poor noodles.

The two boys are infuriated by her comment, saying they treat their Beyoung with the utmost respect.

She points out their mistakes and demonstrates the right way to drain the water from the noodles.

To further prevent the noodles from getting soggy and gross, she adds the sauce packet, continuously stirs the noodle, and adds the seasoning from a high level. She finishes the dish with some ginger topping.

At first, the two boys are not ready to accept that the noodles are any good, but they get blown away by the taste when they eat them. Ishigami reveals that it is Fujinomiya yakisoba, the yakisoba that is often hailed as the best in the world.

Shirogane realizes his mistake and regrets what he has been doing to the noodles all this time.

Iino tells him to take care from now on for the sake of all the Beyoung he will eat in the future. They are delighted and decide to have a Beyoung party that night.

On the other hand, Chika and Hayasaka seem to have landed into severe danger as we see them surrounded by men with Hayasaka holding a knife.