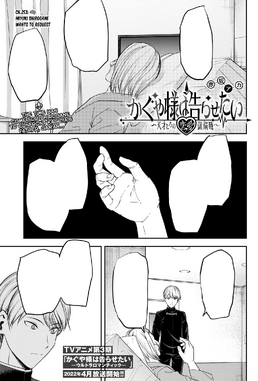 Miyuki tries to convince Gan'an to cancel the marriage between Kaguya and Mikado.

Gan’an starts to talk about his condition, telling Miyuki that he is suffering from vascular dementia and doesn’t have much time. So, before leaving, he has handed down all his business in his will.

He asks Miyuki what he wants from him, Miyuki replies that he wants Gan’an to set her free. Gan’an knows that Miyuki used to go out with Kaguya and has now broken up with her with a settlement. Which means that now he has no business with her.

Miyuki promptly replies to this claim by saying that if it’s for Kaguya’s sake he will happily give the settlement money back, in fact, he will pay back two-fold after he saves Kaguya.

Gan’an tells him that if he wants him to change the will, Miyuki is out of luck because that’s impossible now. He is suffering from Dementia so even if he changes his will, that will not be of any benefit and won’t be considered in court.

Miyuki understands that, but he also wants something else that only Gan’an can provide, i.e., approval to marry Kaguya.

Gan’an is shocked by this proposal and inquires about Miyuki’s age. Miyuki tells him that he is going to be 18 soon which means he can legally marry in a few months.

He is doing this to break the arranged marriage negotiation with the Shijo family. The Shijo family won’t let their heir remarry a divorcee, making Miyuki’s plan successful.

Gan’an is terrified by the offer and can’t process what’s happening. Miyuki further annoys him by repeatedly calling him father. He insists that this is the only way for Kaguya to help her stand up for herself.

Gan’an puts up the fact that Kaguya is a member of the Shinomiya family and she chose to stay herself. Miyuki corrects him that she didn’t make this choice for herself or the company; she made the choice for her father. She wanted to connect with him.

Gan’an reveals the password of the locker in his room in the primary Shinomiya residence where he has kept his will. If the will disappears somehow, they will have to unwantedly divide the assets equally or take parts of it on mutual agreement between the legal heirs.

Miyuki immediately leaves for the will there and goes away. It is then revealed that the passcode is actually the mix of the dates on which Nayotake died and Kaguya was born.