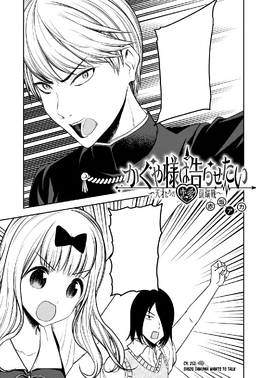 Dr Tanuma tells Miyuki about the story of Kaguya's mother.

Chapter 252 starts with the Shuchiin Academy’s council heading out to save Kaguya. Shirogane tells Chika and Ishigami to grab their bikes which they disagree with, as the destination is quite far. So, they decide to go by taxi.

Shirogane’s first order of business is to talk with Kaguya’s father. He has to convince him first to make a choice that ultimately leads to Kaguya’s happiness. Miko tells him that she has arranged a call with Kaguya’s brother so he can get in without the need to check-in.

Miko inquires about how he is going to convince Gan’an. Shirogane mentions that the rocky relationship between Kaguya and her father is because of a lack of communication between them.

He thinks that Gan’an might be feeling guilty for how he treated Kaguya, not to mention her being his illegitimate daughter, causing her more problems in the family.

Miko also asks about two scary-looking men he left behind with her. He tells her not to worry about them as they are acquaintances and experts in their field, not revealing what they are there for.

Shirogane meets Dr. Tanuma in the hallway, waiting for him. He tells Shirogane about Nayotake Shirogane, who was not an average club worker. Her service could cost you a million yen just for a night.

She was a true beauty, an ideal woman, cultured, educated, and caring, but she had a sly and cunning side hidden beneath the surface.

Her charm was such that even the president fell for her. Unfortunately, though she had hereditary heart disease, one night, she received a heart attack while serving Gan’an. She disappeared after that night.

When she appeared again, she was pregnant with Kaguya. The company’s associates tried to chase her away, but Gan’an insisted on keeping her with the Shinomiya family.

Due to this, she was considered a deceptive vixen by everyone around her, leading to Kaguya being ostracized by the family. Her mother’s death made Gan’an fall sick, so seeing Kaguya might have reminded him about her mother.

Shirogane interrupts, saying that it doesn’t matter. He is angry about how he can treat her like he did. She has always been waiting for him all this time, and she was ready to endure everything for the family.

He is interrupted by Gan’an, who comes in telling them to pipe down. Listening so much about Kaguya, he is ready to hear what the boy has to tell him.