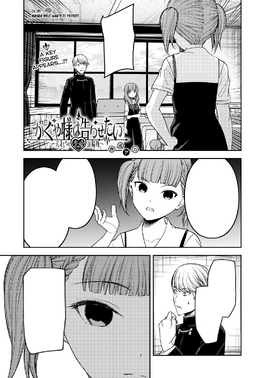 Maki talks to Student Council about Mikado's plan to save Kaguya.

Everyone is shocked by the appearance of Shijo on the scene. She offers to help them in Chika’s plan not for Kaguya but because of her family concerns.

Ishigami provokes her to accept that she is going to such lengths because she cares for Kaguya. After much resistance, she agrees and then expresses her desire to free Kaguya and let her have her happy ending.

Maki tells them that as the elder daughter of the Shijo family, it is her responsibility to stop the war between Shijo and Shinomiya family. She confesses that there isn’t much she can do, and everything is in the hands of the one who will marry Kaguya, i.e., Mikado Shijo.

Mikado is Maki’s brother and has been interested in Kaguya for the last ten years. He is doing everything he can to make everyone think he is worthy of being the family’s heir.

Mikado managed to smooth talk his way into the inner circles of the Shinomiya family. His plan of taking Kaguya as his trophy to make the Shijo family back down has turned out to be successful.

He remembers the promise he made to the “princess” to free her from the Shinomiya family.

If she is to marry Mikado or is made the top person in her family, she is going to be safe either way, so the point comes down to her happiness. Now it is on them to rescue Kaguya or let Mikado handle this issue.

Everyone gets ready for the mission as Mikado claims that if Miyuki cannot save her, he will protect her.