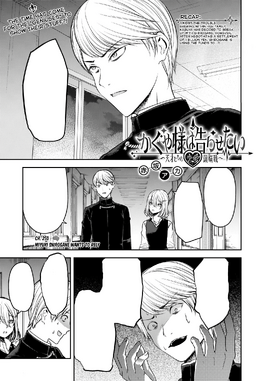 The Student Council plots on how to get Kaguya out of her arranged marriage.

Shirogane and Hayasaka walk back from the rooftop after talking to Kaguya’s older brother. He declares that they’re going to take back Kaguya.

All his confidence flutters away when Hayasaka asks him his plan. Unsure, Miyuki contemplates that they could do anything now that they had one billion yen.

The two meet with Ishigami and Iino and explain the situation. Miyuki asks everyone to come up with plans to rescue Kaguya. Ishigami suggests that they could just kidnap her while Iino’s idea is to expose the Shinomiya family and show how they are violating fundamental human rights.

Ishigami asks Miyuki if he has any plan. Miyuki says that he does, but it was the last resort. They continue discussing ideas and suddenly are interrupted by Chika. She finally comes out from the shadows and says that there’s something even simpler they can do.

She explains that if they get Kaguya to the top of the Shinomiya family, everything will be settled. If Kaguya was at the top, there wouldn’t be anyone who could order her around.

This plan isn’t easy, and her current age poses a major problem, but using Unyo Shinomiya could be a potential solution.

Chika says how he’s the only one who loves Kaguya as his family because he raised her away from the family’s grip. All they had to do was trick Ganan Shinomiya to hand over all his inheritance to Unyo.

Miyuki is surprised to see all her preparation, and she calmly replies that they weren’t the only ones who loved Kaguya. Ishigami doesn’t seem to be surprised as Chika comes from a family of politicians.

As their plan finalizes, an unexpected guest invites herself in. Maki Shijo decides to join the team to help Kaguya reach the top.