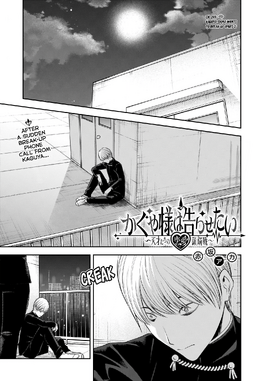 Kaguya-sama Wants to Break Up

Kaguya-sama Wants to Break Up (Part 2) is the two-hundred fourty ninth chapter of the Kaguya-sama wa Kokurasetai manga series.

An older brother of Kaguya tries to deal with Miyuki about Kaguya's marriage.

In the aftermath of the breakup call, Miyuki quietly sits on the roof with a shocked expression. A stranger from the Shinomiya family approaches him with ten million yen and offers him the money, saying that it is a token of appreciation from Kaguya’s brother.

Frustrated, Miyuki yells how the Shinomiyas only care about money, and money cannot solve all their problems. A second man appears and agrees with Miyuki’s sentiment. He introduces himself as Seiryu Shinomiya, Kaguya’s second brother.

He informs Miyuki that normally, his older brother Oko should be the one speaking with him, but as the next leader, he’s been a bit busy.

Miyuki asks him what the Shinomiya family wants with him, and Seiryu replies that even the Shinomiyas wouldn’t be so cruel as to throw a wad of cash his way.

He says he was there to end things properly face to face to maintain proper etiquette. Miyuki tells him that if he really cared about etiquette, he wouldn’t have interfered in their relationship in the first place. Seiryu agrees but says that he has no other choice.

He explains to Miyuki about their dire situation and their plan to use Kaguya as their intermediary with the Shijo family. Angered, Miyuki bluntly asks him if they plan to marry Kaguya off. He adds that a mere marriage will not solve everything.

Seiryu replies by explaining that despite marriage not being a solution to all problems, Kaguya will serve as a key to avoiding a senseless war. He further tells Miyuki that Kaguya was the one who asked him to offer Miyuki money.

Utterly devastated, Miyuki states that he isn’t convinced with such little money because even if Kaguya receives 1% of Ganan’s wealth, that would be 20 billion yen.

If he were to marry Kaguya someday, that inheritance would have been shared with him as well. He demands one billion yen and nothing less.

Seiryu accepts his demand and transfers the money to his account out of respect for his determination. After he leaves, Hayasaka approaches Miyuki expressing how she expected him to be the hero and save Kaguya.

Miyuki laughs and says that they’ve just received some war funds, and they’re going to use these to save Kaguya.