Kaguya-sama Wants to Break UP 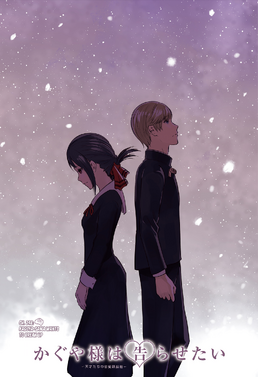 Kaguya-sama Wants to Break Up is the two-hundred fourty eigth chapter of the Kaguya-sama wa Kokurasetai manga series.

What kind of situation drives Kaguya to say good-bye to Miyuki?

Kaguya’s situation has changed dramatically following a turn of events at the Shinomiya household. First, she drops out of school, and now, she’s suggesting Miyuki to break things off between them.

Miyuki’s face holds a terrified expression as he asks Kaguya the reason behind her decision. Kaguya reveals that the recent events have shaken the Shinomiya family’s foundations.

As a part of their plans to mend their business relations, they plan to marry her off to a powerful family.

Kaguya refused this proposal at first because she couldn’t just sit back let her family use her as a tool for their gain.

She declined any inheritance and was even ready to leave the Shinimiyas for good, but when the less powerful members of her family approached her and asked her to reconsider, she was stuck in a tough spot.

They told her how they supported her all this time because they believed that she would rise to power one day. To her, the Shinomiya family is an unbelievable burden to bear, and she cannot let go of them easily.

Kaguya is also confronted by her older brother Oko. He tells her that he had to leave the love of his life for the sake of their family too. He threatens her that he will ruin Miyuki’s life too.

Oko tells her that he previously drove Miyuki’s dad’s business to the ground, and he would do the same to Miyuki if he interfered with their family’s matters.

We also find out that on his death bed, Kaguya’s father still considered her his daughter and wanted to hand over the cosmetics branch of the company to her.

Miyuki asks if she really wants to end their relationship and if she’s really okay with everything. Kaguya replies that she wants to cherish their memories together and plans to take over the company one day.

In the last panel, we see a tearful Kaguya once again asking Miyuki to break up.