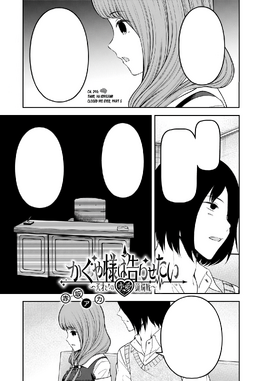 A brief moment of Yu and Miko together.

Chapter 246 continues with Ishigami and Iino hanging out at Iino’s place. They discuss how Kaguya was being extra strict on them because she knew things were about to go south, and she wanted the two to be ready and take on the student council duties.

Miyuki is about to leave for America, and Chika only joined the council to be with Kaguya, so there’s no telling if she’ll come back either.

As the two chat, Iino casually places her hand on top of Ishigami’s. He instantly becomes nervous and wonders how Iino maintained calm when something romantic should happen.

Iino asks him if he wants something to eat. She tells him that a maid stops by three days a week and always prepares her meals. Ishigami denies saying that she won’t have anything to eat later if he eats.

Iino agrees and sits beside him, placing her hand on his again. Ishigami freezes again, but Iino distracts him with a question.

She asks him if he joined the council because of Miyuki, will he still stay afterward or not. Ishigami tells her that he isn’t interested in the council work and wants to find a place to belong. He also says that he isn’t sure about leaving either.

Iino tells him that he shouldn’t force himself to stay. As they continue talking, the two get closer, and Ishigami starts petting her head and playing with her hair. He almost gets lost in his thoughts, but Iino’s voice pulls him back to reality.

The conversation stirs towards Iino getting lonely quickly. The two get a little intimate and are close enough to kiss when Ishigami’s cell phone rings and interrupts their moment. It’s a call from Kaguya, and she tells Ishigami that she is going to leave Shuchiin.