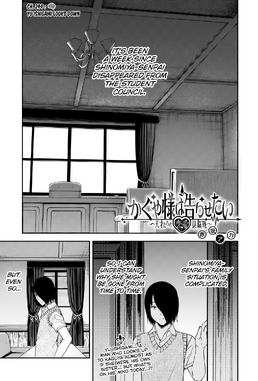 The viewpoint of Ishigami about recent events.

Chapter 244 begins with a concerned Ishigami who is worried that the student council room is empty. He thinks it was natural for Kaguya to be absent because of her complicated family. Yet, he can’t help but wonder where everyone else is.

Chika pops up in his mind as he remembers how she only joined the student council to stay with Kaguya. Miyuki and Hayasaka seemed busy with something else too. Also, Miyuki will soon leave for America, and it’s clear why he’d be busy.

Iino, on the other hand, has no reason to avoid coming. Ishigami feels like Iino was warming up to him, but even if she were the least bit interested, she would have gladly spent time with him. He spirals down into thinking that maybe he is getting the wrong idea about her.

After his downward spiral, he began his descent into overwhelming negativity. Ishigami’s thoughts get the worst of him as he starts wondering how his life would be if he were attractive. He thinks about his past rejections and gets even more dejected, thinking that Iino was being nice to him.

Meanwhile, Iino is in another classroom with Osaragi, who asks her why she isn’t going to the student council room. She tells her that Ishigami is the only one there, and if she goes, he’ll think that she’s clinging to him. Iino reveals that she read on the internet that once a guy starts thinking of a girl as easy, he’ll never see her as girlfriend material.

As the chapter ends, we find out that the two oblivious lovebirds miss each other and are depressed due to the deprivation of each other’s company.