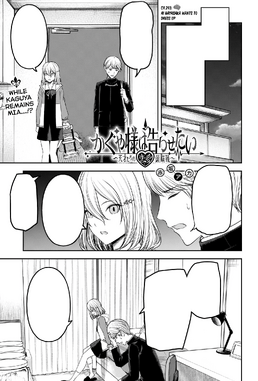 Ai Hayasaka Wants to Dress Up is the two-hundred fourty third chapter of the Kaguya-sama wa Kokurasetai manga series.

Ai and Miyuki try to find a reason for Ai's arrival to Shirogane's house.

Miyuki’s sister, Kei, returns home shortly after them and overhears them talking. She misunderstands that Miyuki and Kaguya had broken up and Hayasaka was his new girlfriend. As they discuss a cover story, Miyuki suggests telling everyone that Hayasaka’s house burned down, but the girl points out that no one will fall for a blatant lie.

Hayasaka says she can pretend to run away from home, but Miyuki notes that the tactic is an ancient trope. They continue trying to come up with something believable, all the while Kei secretly panics, thinking that her future with Kaguya was utterly diminished.

As chaos breaks through, papa Shirogane makes a grand entry, calling Miyuki a degenerate for making Hayasaka dress-up in her maid outfit. Later he clears the misunderstanding by revealing that he is already aware of Kaguya and Miyuki’s situation.

He tells them that he is in touch with Nao and knows that Hayasaka will be staying with them for a bit.