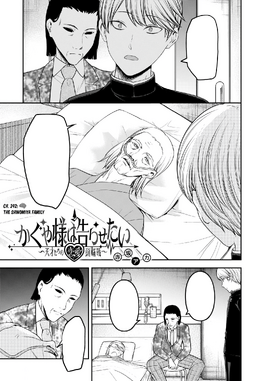 The Shinomiya Family is the two-hundred fourty second chapter of the Kaguya-sama wa Kokurasetai manga series.

Chapter 242 begins Miyuki’s encounter with Ganan Shinomiya, the head of the Shinomiya family. Unyo tells Miyuki that the Shinomiya Group is Ganan’s empire. He stopped at nothing to expand the business and cut down all those who defied him. He then tells him that the old man had only a few weeks left to live.

The rivalry between the Shinomiyas and the new elitists, Shijos, is still largely tied to blood relations. Now that a large part of their executives had been detained, the bloodline purists in the family have started gaining more power, and as a result, Kaguya’s value will go up quite a bit.

The eldest of Ganan’s children, Oko, will likely take over their father, and the second son, Kousei, will be by his side. Unyo was born to Ganan’s second wife, so he is nowhere near the top. Kaguya, too, is an illegitimate child. Her mother was a worker in a red-light district who died shortly after giving birth. Since no one knew how to treat her, Ganan asked Unyo to look over Kaguya as she grew up.

After revealing all the details about Kaguya and the Shinomiya’s past, Unyo tells Miyuki that he called him to make him understand their current situation. Miyuki asks him why Unyo replies to him by saying that he was Kaguya’s only weakness.

To protect Miyuki from not getting kidnapped by the higher-ups, Unyo assigns him a personal bodyguard. The bodyguard in charge of safeguarding Miyuki is Hayasaka.

As the chapter ends, Hayasaka suggests to Miyuki that he can introduce her as his new girlfriend, to which Miyuki profusely objects.