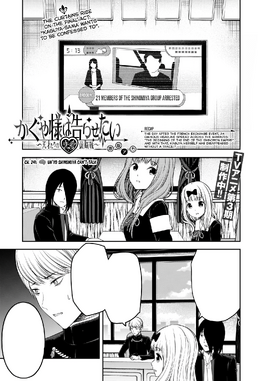 Miyuki talks with Un'yo about Kaguya.

Chapter 241 begins with the TV flashing breaking news that twenty-one members of the Shinomiya group are arrested. With Kaguya’s disappearance, a concerned Shirogane asks his fellow council members whether Kaguya’s parents had been arrested too.

Iino tells him that none of the Shinomiyas were arrested, and only the CEOs and other executives were on the list.

The student council discusses the messy and complicated world Kaguya lives in, which is entirely different from their world. Shirogane tells the group that he had exchanged texts with Kaguya, where she told him not to worry.

They also discuss how intimidating men in black stood outside the school and took Kaguya away right after the French exchange.

After school, Shirogane meets Unyo Shinomiya, Kaguya’s older brother. He asks him whether he knows where Ai Hayasaka is. Shirogane tells him that he doesn’t know, and even if he did, he would never tell him.

Unyo then asks Shirogane to go with him if he wants to know what’s going on, and Shirogane reluctantly agrees. After getting something to eat, the two sit down, and Unyo asks Shirogane about Kaguya’s school life.

He is surprised to see the jovial side of Kaguya and comments how she was always manipulative and calculative at home.

As the chapter ends, Unyo takes Shirogane to a hospital, where the head of the family, Ganan Shinomiya, lies, possibly on the verge of death.