Kaguya-sama Wants to Stay The Night 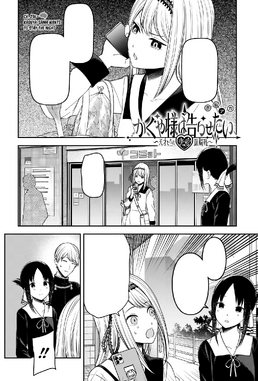 Miyuki Shirogane Doesn't Want to Put It In

Kaguya-sama Wants to Stay The Night is the two-hundred thirty sixth chapter of the Kaguya-sama wa Kokurasetai manga series.

Kei invites Kaguya to the new Shirogane home but then tries to keep Kaguya and Miyuki apart.

She then encounters Kaguya and Miyuki on the way home and is surprised that they are together. Then she remembers that they are a couple.

Kaguya asks if her family is preparing hot-pot for dinner. She mentions that is the plan, but her dad will not be able to make it as he has some function to attend.

She then asks Kaguya if she would like to join her and Miyuki for dinner. Overwhelmed with excitement, she even asks her to stay the night.

Kaguya asks Miyuki if he is okay with it, and Miyuki has no complaints.

Kei is under the impression that Kaguya has not been to their new place before. Then she notices that Kaguya knows which floor they stay on and the location of the bathroom.

She realizes that Miyuki has got Kaguya home without her knowledge and is repulsed by the thought of her brother doing illicit things to the person she admires.

Then she makes it her night’s goal to keep Miyuki and Kaguya as far away from each other as possible. She sees to it that she is always present to third-wheel after them.

After dinner, they all realize that Kaguya needs a place to sleep. Miyuki steps up and says that Kaguya should spend the night with him as he has student council matters to discuss with her.

Kei is not falling for this and states that she is also interested in the student council matters and would love to be a part of this conversation.

Miyuki eventually gives up, and Kei makes Kaguya stay in her room.

The chapter ends with Kaguya telling Kei that she would like to spend as much time with Miyuki before leaving for America, and then she switches rooms.