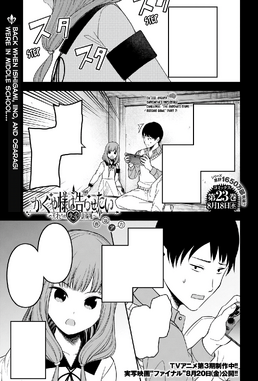 Kobachi talks about Miko and Yu's past.

Episode 232, titled “The Buddha’s Stone Begging Bowl” (Part 7), starts with Osaragi explaining the Iino/Ishigami dynamic back in the past.

She tells Kaguya how Ishigami used to be the friendless guy, whereas, on the other hand, Iino was the strict disciplinarian.

Iino would keep catching Ishigami bunk classes to play video games by the stairs. She asks him why he quit the soccer club, and he tells her how he just played it since he is good at it. However, he never really enjoyed it.

Ishigami then questions as to why she sticks with the disciplinary club as they are the target of everyone’s hate.

Iino tells him that she does not mind being a bad guy if it can help everyone follow the rules and have fun at the same time. Ishigami is somewhat moved after hearing this and decides to support her from behind the scenes.

As she was in the Disciplinary club, people would mess around with her and play pranks on her. However, Ishigami would always be there, putting a stop to it without her knowing.

Osaragi, on the other hand, always noticed Ishigami looking out for Iino. Osaragi continues to tell Kaguya the reason behind her discontentment towards Iino.

Once, Ishigami was falsely blamed for stalking a particular girl. Iino questions him if it’s true, and the fact that she did not trust him in the first place annoyed Osaragi as she has always seen how Ishigami was supporting her behind her back.

The chapter ends with Osaragi wondering what she would have done if she was in Iino’s situation and subtly expressing her feelings for Ishigami.