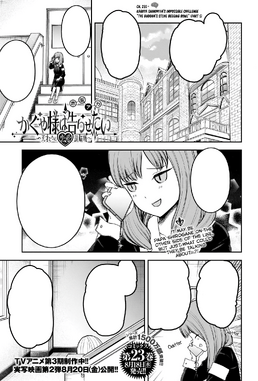 Yu and Rei spy on Miko

Onodera overhears this conversation and already has an impression that Iino is in an illicit relationship with someone older.

Onodera confronts Ishigmami and blatantly accuses him of everything that has happened without giving him any context. Then, after calming down, she tells him that Iino could be in an illicit relationship and needs his help spying on her.

Ishigami is reluctant but still goes along with her. When they reach the shopping district, they see Iino waiting for someone.

After a few minutes, an older adult approaches her, and they both take off together. They seem to be having fun.

Onodera and Ishigami both are clueless as to what is happening. Onodera is under the impression that the elderly man is her sugar daddy. On the other hand, Ishigami thinks that this is just a normal meet-up.

However, Onodera is able to convince Ishigagmi to join the dark side. She then persuades him to intervene since Iino is someone important to him.

After giving it a thought, Ishigami interrupts their meet-up, just to find out that it is nothing like what they thought.

Miyuki’s dad instantly recognizes Ishigami as Miyuki’s friend. Miyuki took some time and then realizes that it is Miyuki’s dad. Iino also tells him how Miyuki’s dad was just helping her choose computer parts.

The chapter ends with Ishigami reflecting on why he acted the way he did after Iino calls him out for being jealous of seeing her with another person.