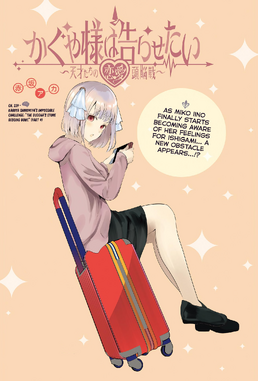 Chapter 229, titled “The Buddha’s Stone Begging Bowl” (Part 4), starts off with Iino noticing that Ishigami and Shiranui are getting closer each day now that they play games with each other regularly.

Iino feels left out as she cannot relate to anything they are talking about, hindering any chance of joining the conversation or getting closer to Ishigami.

Iino then approaches Miyuki to help her out with this issue and resolve it for her. She asks him to teach her to play FPS games to surprise Ishigami when the time comes.

Miyuki thinks about it and suggests that the best way to go about this would be to learn from Ishigami himself, as this will give them a chance to get closer.

However, Iino is not ready to do that as she feels like she will come off jealous and insecure to him, which will be really embarrassing for her.

Miyuki then suggests another name to Iino, and she readily accepts without knowing who it is. She later gets to know that the person teaching her is Miyuki’s dad.

After chatting with him a little, Iino is confident that she will be able to improve her skills under him as he is one of the first-generation FPS gamers.

While playing, Miyuki’s dad calls Iino out for learning to play these games for a guy she likes. Flustered by this truth, Iino shuns it off and continues playing and gets her first kill and first win.

Filled with adrenaline from the match before, Iino realizes why Ishigami is into these games. She goes on to play the entire night and comes to school in a dazed state.

The chapter ends with Onodera misunderstanding Iino playing all night with an older man with her getting a sugar daddy.