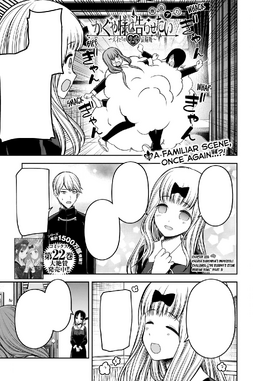 Chapter 228, titled “The Buddha’s Stone Begging Bowl” (Part 3), starts off with Iino and Ishigami getting into one of their usual quarrels.

Since Iino is trying to confess her feelings to Ishigami, she is trying to establish her presence in his life by getting closer to him by being friendly.

After being on good terms for quite some time, Fujiwara is almost relieved that they are quarreling as she cannot come to terms with them being friendly.

Iino proceeds to show her dismay regarding Ishigami’s textual habits. Ishigami holds his own by saying that he hardly uses his phone and is mainly using his computer.

He goes on to explain how he spends his time on Discord. Since many of them did not know what Discord is, he explains the working of Discord to everyone.

Ishgami asks Iino to join discord since she wants to communicate with him so desperately. She denies his offer and states that she would only join Discord if everyone else did.

Fujiwara offers to invite Ishigami to one of her servers since she uses Discord too. He accepts the offer.

Later, that night, he joins the voice channel and starts communicating with everyone, and plays games with them. He ends up playing games till late at night.

The next day, Ishgami is all drowsy in school since he hardly slept last night as he was busy playing games with his new friends.

Ishigami is approached by Kuromo Shirasui, claiming to be one of his playmates from Discord and stating how she had a lot of fun last night. Ishigami’s classmates are surprised that they are acquaintances since Kuromo is quite popular in school.

The chapter ends with Iino feeling insecure as she thinks that Kuromo is trying to steal Ishigami from her.