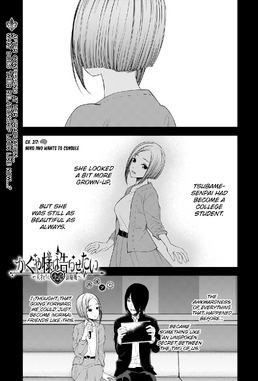 Chapter 227, titled “Miko Iino Wants To Console,” starts off with Ishigami hurting after being rejected by Tsubame. After confessing to Tsubame on Graduation Day, things are just awkward, making it worse for him.

Aware of Ishigami’s current emotional state, Iino uses this opportunity to get closer to Ishigami. She feels the need to establish her presence in his life.

Iino enquires about how Ishigami feels about Tsubame, trying to make him open up to her. He tells her how Tsubame made him feel.

Iino realizes that she will not come across a situation like this again and takes advantage of it. She moves closer to Ishigami and consoles him by gently touching him.

Ishigami is unable to hold himself back after being treated with so much care that he breaks down in front of Iino.

Fujiwara has been watching them for quite some time from the small gap in the door of the Student Council room. She is surprised by how quickly Iino changed her attitude and is trying to get what she wants.

Fujiwara feels like Iino is taking it too far with her manipulations and gives her a call to come outside. Upon meeting, Iino says that she has got everything under control and Fujiwara can rest easy.

Under the impression that Iino just received a call from her dad, he enquires regarding her family situation. Ishigami tells Iino that he is proud of her handling everything the right way and keeping her head up at all times.

The chapter ends with Iino rushing out of the room annoyed that Ishigami cannot take a hint regarding her feelings towards him.