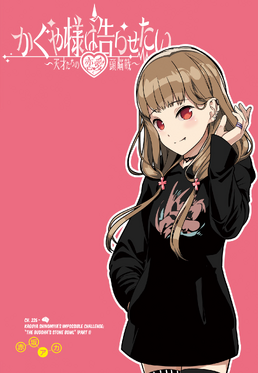 Chapter 226, titled “The Buddha’s Stone Bowl,” Part 1 starts off with Kaguya preparing a bento for Miyuki. She is afraid that Miyuki may not like her food, to which Miyuki assures her that anything made by her is sure to be delicious.

Kaguya decides to act as the ideal girlfriend and proceeds to feed Miyuki herself.

Iino seems to have been spying on them and blushes when she witnesses this. She rushes out, annoyed at the fact that they are so openly affectionate on school grounds.

As Miyuki and Kaguya became more open about their relationship, it started affecting many people in different ways, especially Iino.

While Iino has never had the chance to experience it herself, she has always been interested in romance. That is why she is jealous after seeing the two love birds.

Iino happens to meet Ishigami, who is eating his lunch. She notices that he is stuffing himself with unhealthy food in the name of calories.

As he leaves the room, she speaks to herself, wishing if she could make a bento for him and feed him. Fujiwara happens to hear this and probes Iino to tell her more about it.

Fujiwara manages to make Iino admit her feelings towards Ishigami even though she is so stubborn.

She proceeds to advise her, saying that she needs to lay the groundwork and express her feelings for Ishigami. Only then will he view her as a potential partner.

Failing to do so, will lead to someone else asking Ishigami out, which won’t end well for Iino.

With this, Iino gains the confidence and motivation to make things clear. She decides to take the first step towards confessing her feelings for Ishigami.

The chapter ends with Iino asking Ishigami if he would like to go to the Student Council room together.