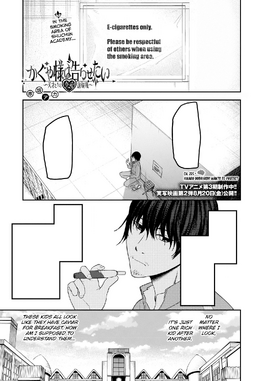 Kaguya has a talk with her teacher.

“Hikaru Oobayashi Wants To Protect,” begins with the class 3-A homeroom teacher, Hikaru Oobayashi being discontent with his relationship with the students as he finds it hard to relate to them.

As Ooyabashi comes back from his casual smoke, he overhears the conversation between Miyuki and his friends.

Kaguya-sama: Love Is War Chapter 226: Release Date, Delay, Discussion Kaguya And Miyuki | Source: Fandom Now that Miyuki and Kaguya’s relationship is public, all his friends are eager to know how far he has gone with her.

Ooyabashi just laments after realizing that no matter the social status of a student, it is only natural for them to be curious about the romantic aspect of their life at that age.

It is the same situation with Kaguya and her friends too. Even they want to know how far along have Miyuki and Kaguya progressed. The blush on her face says it all.

When asked about the details, she is hesitant to reply as she is concerned if anyone will overhear her.

Ooyabashi enters the room at the same time after eavesdropping. Kaguya’s friends come up with some excuse and leave the room.

Kaguya is under the wrong impression that Ooyabashi is trying to blackmail her. Hence, she gets defensive.

Ooyabashi clears the air saying that teachers are the same as students and are not something special so fearing them is not the right way to go about things.

On the contrary, they should use them by opening up to them and learning from their experiences, thus clarifying that he was just trying to look out for her.