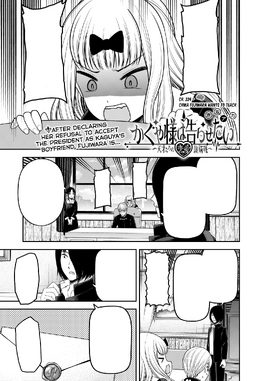 In chapter 224, titled “Chika Fujiwara Wants to Teach”, Chika shows her disapproval of Miyuki’s and Kaguya’s relationship at the start. She tries to intimidate Miyuki in her own childish way showing us how protective she is of Kaguya.

Meanwhile, the student council receives a letter from the school principal stating that the exchange party with their french sister school will be held soon. However, they do not need to worry about the logistics of this event since their sister school will be taking responsibility for that.

The main event of the exchange party has been revealed to be a dance. Miyuki panics as they have requested the President and Vice president to dance at the main event.

Miyuki is not confident in his dance skills and approaches Chika to help him get better. Thus, begins another training session with Miyuki and Chika.

Fortunately, Miyuki grasps all the basics quickly and is good to go. Chika mentions how Miyuki has always been a quick learner and is proud of him.

Kaguya enters the room, and Chika uses that opportunity to make Miyuki and Kaguya rehearse their dance to give them some personal time.

The chapter ends with Chika approving Miyuki and Kaguya’s relationship.