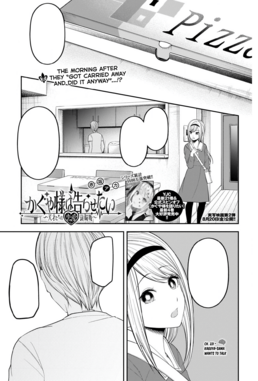 The ABCs of Men and Women, Part 6

After Kaguya and Miyuki have sex they have their own thoughts about it with Miyuki discussing it in his head and Kaguya talking with Hayasaka about the experience with Kaguya coming to the resolve of spending the rest of her time with Miyuki in peace.

In chapter 221 titled “Kaguya-sama Wants to Talk”, Kaguya shares her experience of spending the night at Miyuki’s house with Ai Hasayaka.

Hasayaka is shocked by Kaguya’s bold move and asks about her experience. Kaguya confesses that being that close to Miyuki made her love for him increased by a 100 percent and they went all the way the night before.

Meanwhile, Miyuki’s sister, Kei, returns home the next day to find a pizza box by the table. Knowing her brother does not usually order pizza for himself she asks if someone had come to visit. Miyuki immediately gets flustered by the question and lies about it.

He then goes back to his room and recalls the events from the night before, cursing himself for being a hormone crazed teenager. He feels ashamed that he forced Kaguya into doing it while he was the one who suggested taking things slow.

On the other hand, Kaguya feels like the one who had seduced Miyuki into sleeping together the night before. Hasayaka observes how enlightened Kaguya’s words have become as she shares her experience.

Hasayaka realizes that Kaguya has finally become the normal high school student she wished to be. Disregarding all the class, reputation, and status drama revolving around her life, Kaguya has changed immensely after falling in love with Miyuki.

Kaguya says that she wants to spend every second of the last four months she has left with Miyuki before he goes off to college. She plans to eat together, go to school together and spend the break times with him in school, even if it meant the whole school finding out about their relationship.

Kaguya plans to reveal everything about her relationship with Miyuki to Chika, but is quite scared of her reaction.