The ABCs of Men and Women, Part 6 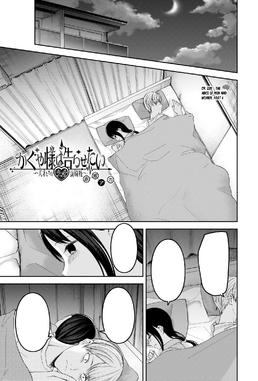 The ABCs of Men and Women, Part 5

The ABCs of Men and Women, Part 6 is the two-hundred twentieth chapter of the Kaguya-sama wa Kokurasetai manga series.

Kaguya and Shirogane try to have sex and succeed.

In chapter 220 titled “The ABCs of Men and Women Part 6”, Kaguya and Miyuki share the same bed while huddled close to each other.

Things start moving really fast and a flustered Kaguya stops Miyuki from advancing ahead. He realizes Kaguya is scared to go further and stop and composes himself.

Kaguya urges him to keep going since it’ll probably be the last fond memory the two would have before Miyuki goes off to college. Miyuki explains to Kaguya that despite their distance, they would still talk everyday and he would even visit Japan when he gets the opportunity.

But, Kaguya is still skeptical and thinks that during the four years of their long distance relationship, something might happen between them and they might breakup. Miyuki assures her that nothing like that would ever happen which delights Kaguya and she thanks Miyuki with a kiss.

One kiss turns to two and soon the couple goes off in their own romantic world. Their love turns so steamy that even though they had planned to stop the advancements, they take it all the way.

The next morning Kaguya wakes up realizing what had happened the night before and gets embarrassed.