The ABCs of Men and Women, Part 4 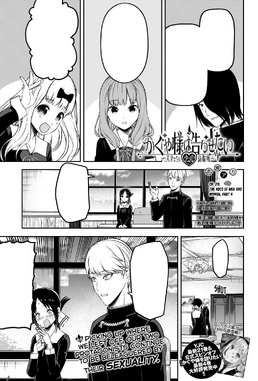 The ABCs of Men and Women, Part 3

The ABCs of Men and Women, Part 5

The ABCs of Men and Women, Part 4 is the two-hundred eighteenth chapter of the Kaguya-sama wa Kokurasetai manga series.

Kaguya and Shirogane try to figure out if they're ready to have sex.

In chapter 218 titled “The ABCs of Men and Women Part 4”, Kaguya and Miyuki are left alone in the student council room after everyone decides to leave for the day.

To get rid of her shyness, Kaguya decides to have a heart to heart conversation with Miyuki.

The two talk about everything from Darwin’s Theory of Evolution to their own ambitions in life. Miyuki shares that he wants to be someone who can bring peace to the world and asks Kaguya to share hers as well.

Kaguya confesses that she wants to rule over the world, but is disheartened realizing their completely opposite ambitions. Miyuki pacifies her worries by saying that no matter what, they’ll always be supporting each other.

Kaguya also shares about her miserable life under her brother’s watchful eye. Miyuki suggests Kaguya to have dinner at his place for a change of pace. The two head over to the Shirogane house, holding hands.

Miyuki shows off his own room when he gets a text from his sister saying that she won’t be home tonight. Papa Shirogane is also out for the night meaning the two lovebirds are left all alone.

Things turn more awkward when Kaguya and Miyuki realize they are all alone at home. Miyuki suggests Kaguya to call it a night and head back home, but Kaguya insists on staying.

Later, Miyuki makes up his mind and asks Kaguya to spend the night at his place.