The ABCs of Men and Women, Part 3 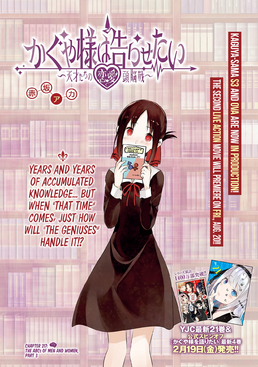 Kaguya and the Girls Want to Talk

The ABCs of Men and Women, Part 4

The ABCs of Men and Women, Part 3 is the two-hundred seventeenth chapter of the Kaguya-sama wa Kokurasetai manga series.

Kaguya and Shirogane have a misunderstanding involving Gomanosuke.

In chapter 217 titled “The ABCs of Men and Women Part 3”, Kaguya is ready to face Miyuki and get rid of her fear of being close to him when she reads the situation completely wrong.

Kaguya’s imaginations take a wild turn and she ends up thinking that Miyuki is checking her out. She feels even more shy and embarrassed towards him and wonders why he is suddenly behaving like that.

It’s not what Kaguya is thinking at all, in-fact Miyuki is only trying to get rid of a burr stuck to her dress. Thinking Kaguya will throw Gomanosuke, the cat, out of the student council room after witnessing the mess he created, Miyuki wants to discretely throw away the burr.

Kaguya’s inappropriate thoughts make matters worse for her when she sees Miyuki switching his target to Ishigami instead.

The whole situation is put to a stop when Fujiwara picks the burr off of Kaguya’s dress and explains that Gomanosuke is the cause behind the mess.

Embarrassed for her wild imaginations Kaguya mentally curses herself for thinking badly of Miyuki.

Later, Miyuki explains that he feared Kaguya might throw Gomanosuke away for creating the mess, so he tried to get rid of the burrs quietly. But now, Kaguya seems more than happy to oblige after the cat put her through that embarrassing situation.

The chapter ends with murder in Kaguya’s eyes and Miyuki and Fujiwara trying to save Gomanosuke from Kaguya’s wrath.