The ABCs of Men and Women, Part 2 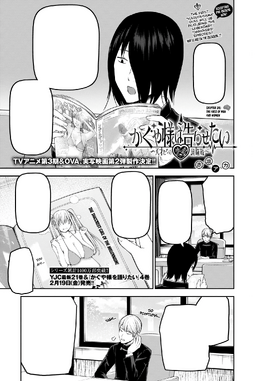 Kaguya and the Girls Want to Talk

The ABCs of Men and Women, Part 2 is the two-hundred fifteenth chapter of the Kaguya-sama wa Kokurasetai manga series.

The boys talk about what size breasts they prefer.

In chapter 215 titled “The ABCs of Men and Women”, Ishigami and Miyuki have a conversation in the student council room about preferences in women and their body types.

The two become so engrossed in their boys talk that Ishigami calls Miyuki a freak for opening up to him. This enrages Miyuki and he does what every normal teenager does in that situation, seeks advice from his best friends.

Miyuki asks Mikado and Tanuma about their preferences and after all the deep conversation Miyuki feels guilty of lying to his friends.

He comes clean by stating he has no experience with women whatsoever.

To which Tanuma replies to Miyuki by saying that he had felt a certain wall before but now it seems that all of Miyuki’s walls have been knocked down and their friendship has grown stronger.

Mikado also takes lesson from Miyuki’s book and comes clean. He also confesses he was trying to act in front of Tanuma, and the three them decide to call each other by their first names thanks to their now grown friendship.

However, unaware of a certain girl eavesdropping the three friends share even more of their secrets and continue with the boys talk.

Turns out, Kaguya was eavesdropping on their whole conversation and had listened to every word they said.