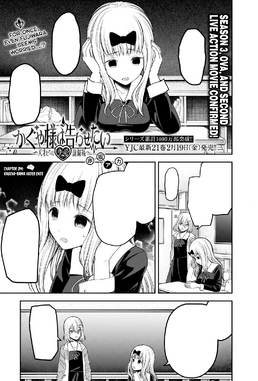 The ABCs of Men and Women, Part 2

Chika talks about owning a pet when she will live alone during her college days and asks which animal Ai and Kaguya would prefer? Dogs or Cats?

Kaguya, traumatized by a cat attacking her friend, expresses that she’d much rather get a dog than a cat.

But, Kaguya is in for a surprise when she finds Abe’s cat inside the student council room. At first, Kaguya is very apprehensive towards it, but her heart slowly melts with the cat’s overload of cuteness.

Kaguya even warms up milk for it to drink and when Ishigami catches her playing with the cat, Kaguya gets embarrassed.

However, Ishigami is certain that Kaguya is slowly becoming a cat person and has already started liking the cat.

Even when Kaguya kicks the cat out of the council room it still returns the very next day and sits on Kaguya’s lap. Accustomed to the cat’s antics by now, Kaguya even decides to name it and calls it Edward.

President, Fujiwara, and Ishigami are astonished to see the changes in Kaguya.

Later, Fujiwara informs that it is Abe’s cat and it is already been named Gomanosuke. Kaguya seems disappointed hearing this as she has already started liking the cat.

However, Gomanosuke is very apprehensive towards President Miyuki.