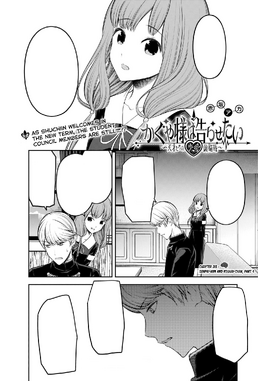 Mikado Shijo Wants to Fit In

Senpai-kun and Kouhai-chan, Part 4 is the two-hundred thirteenth chapter of the Kaguya-sama wa Kokurasetai manga series.

Chika and Kaguya learn how close Miyuki and Miko are.

In chapter 213 titled “Senpai-kun and Kouhai-chan Part 4”, Miyuki is seen asking Miko’s advice on how to help Kaguya better.

Miyuki tells her that what if the world does not treat them as equals but as mere children. Miko reassures him by saying the world relies on teamwork and he does not have to worry about growing up alone.

Miyuki is shocked to hear Miko’s wise words and praises her for being a more matured person. She pats the president’s head when Fujiwara comes inside the student council room, misinterpreting the whole situation.

Chika Fujiwara asks them to explain their growing closeness when Miko tells her that she is just boosting up the president’s morale.

Miko tells Chika not to misinterpret as she knows who Miko actually has feelings for.

Meanwhile, the three of them have a discussion on who Miko likes better between Chika and Miyuki when Kaguya comes inside the council room as well.

Chika being jealous of Miko sitting next to Miyuki complains about their growing closeness to Kaguya.

Later, Kaguya apprehends them by asking what Chika means by that statement. On the other hand, Miyuki is worried that Kaguya must have read the situation wrong.

Kaguya seems to be having a complete meltdown thinking about Miko and Miyuki’s relationship when Miko clears the air. She even declares that she would commit seppuku if she ever got in between them.

When the whole misunderstanding situation is off the table, the four of them enjoy their lunch together.

The chapter ends as Miyuki plan to help Kaguya falls into place.