Mikado Shijo Wants to Fit In 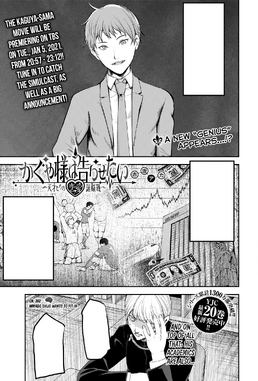 Mikado Shijo Wants to Fit In is the two-hundred twelvth chapter of the Kaguya-sama wa Kokurasetai manga series.

Mikado deals with the issues of being the new kid at school.

In chapter 212 titled “Mikado Shijo Wants To Fit In”, the story takes a new turn with Mikado’s arrival.

However, the intelligent Mikado Shijo feels like an outcast joining a new school in the last year and seems to have a hard time fitting in and approaching people.

The other in their class are also quite scared to approach Mikado because of various rumors surrounding him while he was a brutal soccer player.

Meanwhile, Mikado recognizes Kaguya and casually approaches her but Kaguya is offended by his casual approach. Miyuki seeks this opportunity to introduce himself to Mikado and tells him how he has worked hard to defeat him.

However, Miyuki is taken aback when Mikado tells him that he looks up to him for his sheer perseverance in getting first place every time.

Miyuki blushes by the compliment and realizes Mikado is not that bad of a person he thought him to be.

While this is happening, Maki approaches Kaguya and expresses how the two similar people seem to have befriended each other. She thinks Miyuki and Mikado are too smart for their own good.

But, Kaguya does not believe that they are similar and thinks Miyuki is way different than Mikado.

Mikado also reveals that his parents were the ones to force him to get the top grades so that he could continue to play soccer and stay on the team.

Later, Miyuki is seen on the school rooftop thinking about the things he and Kaguya had discussed before the end of Spring Break. He knows that this is the last term he can attend as a normal high school senior and regrets not being able to help Kaguya.

He plans to help Kaguya as much as he can even if it means sacrificing his powers.

The chapter ends as Miyuki prepares for his battle arc.