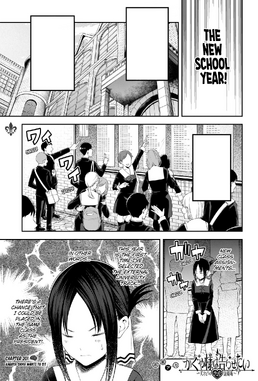 Mikado Shijo Wants to Fit In
Kaguya Wants to Sit is the two-hundred eleventh chapter of the Kaguya-sama wa Kokurasetai manga series.

Kaguya worries about whether or not she and Miyuki will be in the same class as the new school year begins.

Kaguya is seen worrying about whether she and the president have been allotted the same class as she had taken external university track just to be closer to him. She had even prayed to the Gods for this.

Ai Hasayaka tells her to check the classroom herself to find out but Kaguya is pretty nervous about the whole situation.

Kaguya finds out all her friends like Ai, Nagisa, Erika, Karen, Mirin, Subaru and even Chika in the class 3-A as her. Kaguya sits on her seat but is worrying whether the president will sit on the seat behind her.

Shindou Watanabe is introduced as Shindou to her and she fears that he would get the seat behind her when Nagisa informs he just has a weird first name.

Just as Kaguya is talking to Nagisa, Miyuki Shirogane and Chika enter her classroom and Miyuki sits behind her. Kaguya gets reassured that her prayers were answered.

Meanwhile, Ishigami introduces himself to class 2-A and everyone welcomes him for a change and he feels the environment Tsubame senpai had created for his sake.

Ishigami also finds Miko Iino seated in front of him and calls their connection an unwanted fate.

But Miyuki Shirogane gets a surprise lasting a lifetime when his rival Mikado Shijo transfers to their class.

Miyuki has always wanted to beat Shijo at school exams and is now shocked with his sudden appearance and with Kaguya thrown into the whole situation observing them.