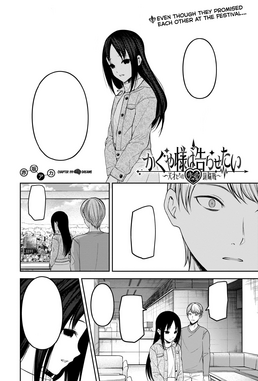 Dreams is the two-hundred ninth chapter of the Kaguya-sama wa Kokurasetai manga series.

Kaguya discusses the chains of her family and her plans for the future.

In chapter 209 titled “Dreams”, Kaguya tells Miyuki about the fact that she has taken down her application to go to Stanford College. Miyuki asks her the reason behind doing so. She tells him but also requests him not to tell any of this to Hasayaka.

Kaguya tells Miyuki the memories of her talking to her brother after the Un’yo incident. Kaguya’s brother tells her that he sees the Hasayakas as just mere pawns and he had only lent Ai Hasayaka to her as he was worried about his sister.

She implores him not to mess with Ai’s life anymore and sets her free hearing which her brother just shrugs her off. He tells Kaguya to give up on attending Stanford as he wishes to marry her off. He expresses his opinions telling no family would want a wife more qualified than them.

He even goes on to say that marriage is a woman’s true happiness and how he has an older brother would never want his sister to kill off her happiness.

Kaguya is shocked to hear her brother say that he knows about her relationship with Miyuki and asks her to make the right decisions.

Later, after telling the whole story Kaguya expresses how she feels like a mere pawn in the hands of her brother and how by continuing with the ways things have been, she would be married off, forced to birth a son and eventually her son would also be a pawn to her brother’s Showa Era patriarchal mindset.

Kaguya wants to crush that mindset from its very core. She plans to overthrow her brother and become the head of the Shinomiya family so that he can realize the concept of “women being inferior to men” that he gloats of, would be a curse of his very existence and he would never belittle a woman again.

Kaguya plans to stay and fight for her rights to which Miyuki agrees by saying he would stay with her. Kaguya tells him to follow his dreams.

She already feels guilty of what the Shinomiya family had done to their business and Miyuki planning to kill his dreams for her sake would make her never forget this guilt.

She had a new dream to get away from her family and stay with Miyuki, making the Shirogane’s her own family but circumstances forced her to give up on them.

She apologizes to Miyuki and tells him it would be better if they took a break from their relationship to focus on their goals at hand.