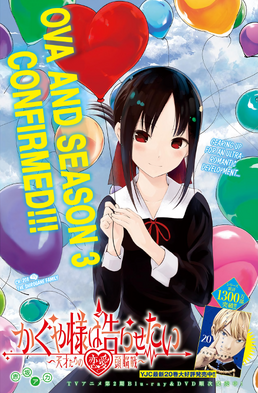 The Shirogane Family is the two-hundred eighth chapter of the Kaguya-sama wa Kokurasetai manga series.

In chapter 208 titled “The Shirogane Family”, Kaguya visits the Shirogane household and meets Papa Shirogane who requests her to stay for dinner.

While Kei and Miyuki clean up their house for Kaguya, papa Shirogane tells her to go shopping for dinner with him.

During shopping they discuss Miyuki and how his motivational posters might have freaked Kaguya out. Kaguya confesses that she was in fact startled by the posters and Miiyuki’s dad informs her that the posters were for Kaguya’s sake.

Miyuki had made them so that he could better himself and be a man Kaguya could depend on. Kaguya later asks about Miyuki and Kei’s mother.

Papa Shirogane says it was his fault that drove her away and because of his incompetence she would put high expectations on her kids.

Miyuki not being able to keep up with her expectations was discarded by his mother while she started expecting from Kei. Kei also eventually grew frustrated by her high expectations and decided to live with her father and brother.

Miyuki is still horrified by his mother’s rejection and that might stick with him throughout his life.

Later, after dinner papa Shirogane asks if Kaguya would like to spend the night at their house to which Kaguya agrees. Miyuki is however not a fan of the decision and thinks Kaguya’s family might object. Kaguya reassures them and bonds with Kei during bath time.

Kei, Kaguya and Miyuki lay their futons in one room with Kaguya sleeping in the middle and Kei and Miyuki on either side. Kaguya talks to Miyuki about his worries.

She asks if he still feels the need to be perfect and kind in front of everyone to which Miyuki replies with a yes and Kaguya tells him that she has the same worries.

The two hold hands while talking and Kei seems to pretend to sleep in order to eavesdrop onto their conversations.

Kaguya hugs Miyuki while he gets flustered thinking Kei might see them in the compromised situation. Kaguya however does not move and continues to hug Miyuki.

The two doze off to sleep in the same way and realize in the morning that they were hugging the whole night.

Looks like Kei has suffered a sleepless night because of their closeness and later Kaguya goes home telling Miyuki she has something important to share with him later.