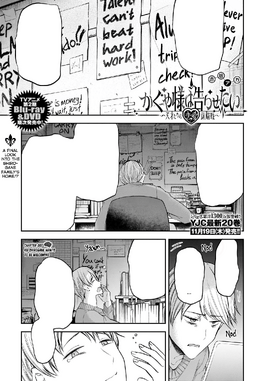 Kei Shirogane Wants to be Welcoming is the two-hundred seventh chapter of the Kaguya-sama wa Kokurasetai manga series.

Kei tries to make the house presentable for Kaguya's visit.

But Miyuki stays awake the whole night before Kaguya’s visit pondering about moving companies and cleaning up, and ends up sleeping till 2pm the next day.

Kei unexpectedly opens the door to find Kaguya standing by it and she in a flustered manner slams the door in her face.

She hurriedly tries to wake Miyuki but to no avail, she dresses up and cleans the trash in her home to appear decent in front of her idol Kaguya.

Kei lets Kaguya inside and when asked about Miyuki she lies to Kaguya thinking that if she says he is sleeping, Kaguya might lose interest in her brother and the hopes of Kaguya becoming her sister-in-law will shatter into nothing.

Kei asks Kaguya if her feelings for her brother are true or not, to which Kaguya gladly replies with an honest yes. She is in disbelief that someone great like Kaguya could see her brother as a man.

The two have a heart to heart conversation about Miyuki. Kaguya asks if Miyuki is kind to Kei as well. Kei hesitates for a moment before saying that although her brother Miyuki is loud and obnoxious, he treats her very kindly and has a great love for his family.

Miyuki wakes up amidst their conversation and Kei figures out Kaguya already knew that she lied about her brother not being at home.

Miyuki wants to clean up his room but Kaguya ends up going inside to help and sees Miyuki’s motivational quotes stuff on the wall, some gravure magazines and trash in his room.

Miyuki tries to explain himself to her but Kaguya does not mind the situation too much.