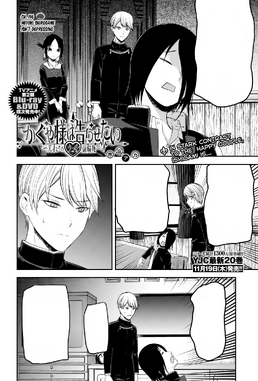 Miyuki had promised to show her and he reminds her not to get her hopes too high as he owns a small apartment.

Fujiwara suggests he look for one to get over Tsubame senpai quickly. She pities Ishigami and mocks him for still being hung over on Tsubame senpai.

She quickly reminds Ishigami not to get any ideas of her being in love with Ishigami to which Ishigami replies that he does not see Fujiwara as a woman. The two bicker for quite a bit and Fujiwara suggests Miko as Ishigami’s future partner.

Miyuki and Kaguya are shocked hearing the suggestion but Ishigami quickly shuts Fujiwara’s suggestion down saying “Literally anyone would be a better match than Miko.”

Miko gets depressed hearing this and Miyuki stays in the council room to console her. Miyuki is well aware of Miko’s feelings for Ishigami and knows how the sudden comment affected her.

She confesses that despite trying to be a good girl, she had felt happy when Tsubame senpai rejected Ishigami’s confession. Even though Tsubame had been nice to her she secretly hated her.

Miyuki consoles her and asks if he could do anything for me. Miko suggests he give her a hug to which Miyuki freaks out as she is aware Miyuki has his girlfriend, Kaguya.

Miko gets depressed talking about how gender differences keep people apart and asks for Miyuki’s advice on how to handle depression.

Miyuki suggests she write pages filled with motivational quotes and stick them on her walls.

Miko finds the idea terrifyingly creepy. She fears Miyuki might be even more depressed than her and she suggests that he should get rid of the papers in his house before Kaguya visits him during Spring Break.