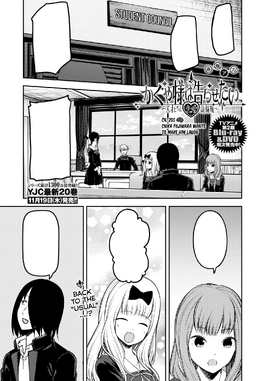 Chika Fujiwara Wants to Make Him Laugh is the two-hundred fifth chapter of the Kaguya-sama wa Kokurasetai manga series.

Everyone tells jokes to help Yu cope with his heartbreak.

In chapter 205 titled “Chika Fujiwara wants to make him laugh”, the student council gathers once again after the graduation ceremony.

Ishigami seems extra cheerful and gives weird answers when Kaguya asks him any question. He answers to the food question by stating that he wants fried pudding.

Kaguya laughs at his jokes saying that there is no such thing as fried pudding.

Fujiwara gets furious about his nonchalant answers and admits none of his jokes appear funny to her.

She requests the student council members to participate to make Ishigami react to their jokes. She asks everyone to say something stupid to get a reaction from Ishigami.

Everyone tries to make him react once but they all end up failing. We also witness a moment between Kaguya and Miyuki as Miyuki cheers up a depressed Kaguya when Ishigami does not understand her joke.

In the end it is Fujiwara who bring back the real Ishigami when she says she has not said a stupid thing in her life. Ishigami, shocked by her statement, replies with a “bruh” proving to everyone that he is indeed back to normal.

Later Kaguya, Miyuki and Miko talk about how the influential Tsubame involved everyone into the whole confession and rejected Ishigami.

They wonder if Tsubame did the right thing by involving everyone and rejecting Ishigami when Ishigami was not her type.

Miyuki talks about how the whole situation is under the control of those two and what they do from here on would be their decision to make.