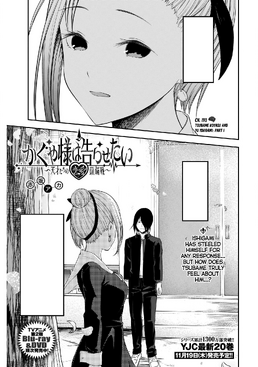 Tsubame tries to turn down Yu.

In chapter 203 titled “Tsubame Koyasu and Yu Ishigami: Part 1”, Ishigami confesses his love for Tsubame under the cherry blossom tree.

Tsubame reminiscences about the time when she first met Ishigami. She remembers how everyone was wary of the new kid in school. People were spreading nasty rumors about him, but Tsubame took courage and talked to him.

His hard work and kind nature impacted Tsubame’s heart, and he was amusing as well.

Tsubame also remembers the countless times Ishigami had helped her and considered him precious.

But Ishigami’s love for her was different from her platonic love for him.

Meanwhile, Kaguya and Koga eavesdrop on their confession and hear Tsubame reject Ishigami. Kaguya thinks it’s over for Ishigami, but Koba still has hope for his sincerity.

Ishigami promises to treat her well and asks her to give him a chance. Ishigami, knowing Tsubame is weak against assertive people, goes out of his way to show her his assertive nature.