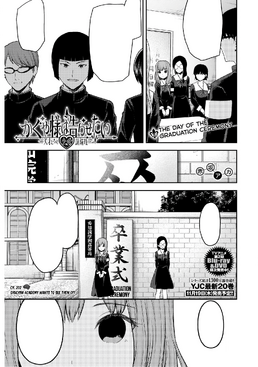 Shuchiin Academy Wants to See Them Off is the two-hundred second chapter of the Kaguya-sama wa Kokurasetai manga series.

In chapter 202, titled “Shuchiin Academy Wants to See Them Off,” begins with Koba and Miko conversing about how sad it is to part with friends on the graduation day.

Then at the school auditorium, the principal gives a speech to the students about parting ways and cherishing those friends who are close to their hearts.

Further, Fujiwara and her classmates cry as they’re going to miss each other. Shirogane throws a small party in the council’s room for the president.

Then we see Ishigami’s senpai tells apologizes to him for not being able to help in any way. Ishigami refuses and starts crying, thanking him for always being there for him and supporting him since day one.

At the end of the chapter, he prepares himself for not crying no matter what response Tsubame may give to him.