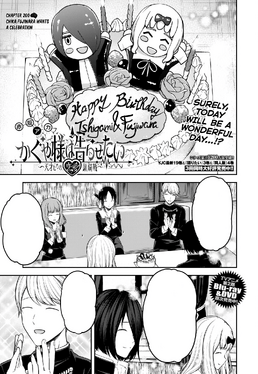 Kaguya Wants to be Heard

In chapter 200, titled “Chika Fujiwara Wants to be Celebrated,” they are celebrating Fujiwara and Ishigami’s birthday together as they both were born on the 3rd of March.

Fujiwara wasn’t too happy about celebrating her birthday together with Ishigami.

Fujiwara also gets a bit jealous of all the gifts that Ishigami receives. When Kaguya gifted Fujiwara the tickets to a cruise so they could spend time together and talk, she became happy again, apologized for being a crybaby, and thanked everyone for the gifts she had received.

Further, while going home Shirogane told Ishigami about how much he has grown over the years and not to mention his academic performance has also been good.

In the last scene, Kaguya asks Tsubame about what she will gift Ishigami, to which she says that she has asked Ishigami to wait a little longer. She mentions that it’s the greatest gift only she can give!