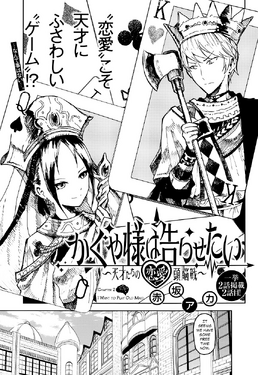 I Want to be Invited to a Movie

I Want to Play Old Maid is the second chapter of the Kaguya-sama wa Kokurasetai manga series.

Kaguya makes a bet with Miyuki over a game of old maid.

Shirogane and Kaguya are done with their student council duties. They think of something to do. Kaguya invited Miyuki to a simple game of old maid. A standard deck of cards and one joker. There is a bet, whoever wins can order the loser anything they want. Kaguya said only gentlemanly requests. This destorys Miyuki's lewd thoughts. Shirogane asked if the cards presented by Kaguya is legit. Kaguya swear upon her honor as a Kaguya. Suspicous Shirogane thought of scent, patterns or hidden markings. Kaguya got the joker so she draws a card. Shirogane took the Joker from Kaguya. They stated this is a mind game in which it takes wit and luck. Shirogane puts the joker in an obvious spot where the joker will be. Kaguya took the obvious joker card. Shirogane uses this opportunity to win but has second thoughts. "Whats a gentlemanly request anyway?". Kaguya planned to lose and make Shirogane take her to the movies with him. But that would look desperate thought Kaguya. Shirogane thinks that if he loses Kaguya will use the win to pressure him to take her to the movies. Shirogane wins and asks whats a gentlemanly request anyway. Kaguya said an example(movie or her plan). Shirogane found out and took the vouchers. Shirogane said to himself its easy to locate and it make sures that he will not fall to the trap of making Shirogane ask out Kaguya to the movies. Now he doesn't have to go with Kaguya into the movies which makes him sad. Still Shirogane played casual and said to Kaguya that he found the vouchers Chika gave to her. Shirogane made the request that Kaguya takes the voucher and use it whatever she wants with it. They both thought to themselves maybe by chance they can watch together. That would never happen they both thought. Todays battle to be continued.