Kaguya Wants to Be Heard 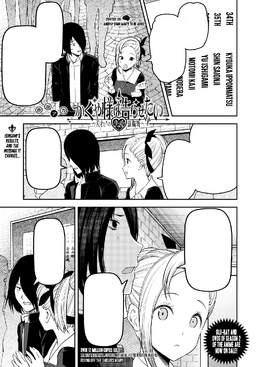 Kaguya Wants to Be Heard is the one hundred-ninty ninth chapter of the Kaguya-sama wa Kokurasetai manga series.

Kaguya tries to find out if Miyuki gives up on studying because he said his motivation to study has been achieved.

Chapter 199, titled “Kaguya-sama Wants To Be Heard,” begins with Ishigami scoring better in exams than before. Kaguya ranks first and asks Miyuki about why he didn’t rank first, to which he replies that he has been busy preparing for studying abroad.

Later, we see Kashiwagi and Kaguya having a conversation about how boys will stop putting efforts once they are in a relationship. Similarly, she says that Miyuki will no longer do anything to strive, as he has finally achieved his goal.

Hearing that made Kaguya worry, so she sends a message to Miyuki saying she wants to see him to talk about something important.

When Shirogane receives the message, he worries and fears that Kaguya will reproach him for the low grade he got. He concludes that she may want to end the relationship.

Then, after a while, Kaguya arrives in the student council room and starts testing Miyuki to see if he’s stopped putting effort into their relationship.

But when she saw that Shirogane was still the same as ever and was still putting effort into their relationship, Kaguya decided to apologize to him. As an apology, she gives Miyuki a foot massage.

Miyuki was uncomfortable laughing and Miko came inside the council’s room and witnessed that. She concluded that Miyuki likes treating girls like slaves in a relationship.