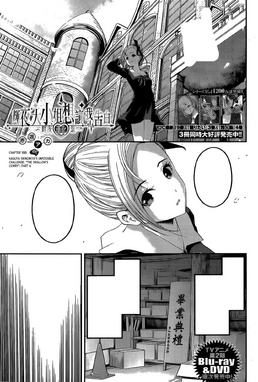 Kaguya Wants to Be Heard
Kaguya Shinomiya's Impossible Challenge: "The Swallow's Cowry", Part 6 is the one hundred-ninty eight chapter of the Kaguya-sama wa Kokurasetai manga series.

Chapter 198, titled “Kaguya Shinomiya’s Impossible Challenge: The Swallow’s Cowry,” begins with Shuchiin’s semester ending soon, which means the final exams are around the corner. Ishigami has a very clear goal, that is to ace the tests and get good enough grades to come under the school’s top 50.

Ishigami has two reasons why he wants to do it. First, he hopes to keep his promise to Kaguya. Also, he wants to be closer to Tsubame in terms of school performance. But having a clear goal does not mean Ishigami will achieve it easily. Studying for the exam proves to be difficult as Ishigami is addicted to playing video games.

Ishigami admits to Kaguya about his addiction to gaming and not being able to study. Kaguya, being very understanding, explained to Ishigami that not every student has the same abilities as others. She also says that Ishigami isn’t the best when it comes to studying but he is certainly better at other things.

Further, Ishigami says that he wants to get good grades. Kaguya suggests removing all the distractions from his room and locking himself for a few hours. As a person cannot change his feelings in one day. But change in environment would be more conducive for studying.

In the end, Ishigami manages to study and accomplishes his goal. He lands at the top 36 after the final exam. Kaguya sheds some tears of joy for Ishigami and the fact that this success is all because of his efforts.