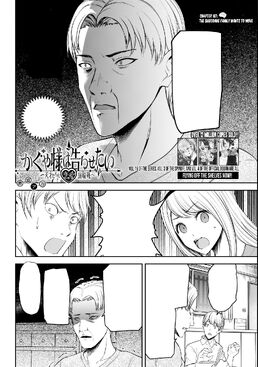 The Shirogane Family Wants to Move is the one hundred-ninety seventh chapter of the Kaguya-sama wa Kokurasetai manga series.

Miyuki chooses an apartment for the Shirogane family to move.

Chapter 197, titled “The Shirogane Family wants to move,” begins with Kei and Miyuki’s father asking them about moving out of their house. Their father tells them it was because he was followed by a fangirl and wanted to move in a more prominent place with an automatic lock.

He lets Miyuki choose the site, and finally, Kei rejoices on having a separate bedroom. Miyuki hunts for houses and searches for a place closer to Shinomiya residence and runs wild with fantasies.

Fujiwara stumbles on Miyuki, searching for apartments and tries to help him. Still, Yu catches on and calls her out for being sensitive to the Tokyo caste system because she lived in Shibuya, the classiest part of Tokyo.

Fujiwara refutes, but she and Yu start causing a commotion over that matter. Shinomiya comes in and learns about the President moving, she gets worried that might be transferring, but Miyuki reassures her that he was moving near her residence.

Shinomiya becomes happy to hear this and decides she wanted to visit his old place before he moves!