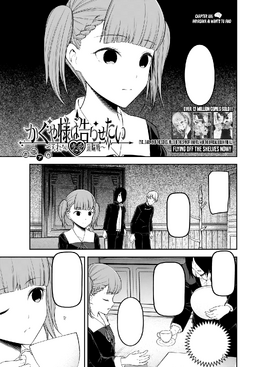 Ai Hayasaka Wants to Find is the one hundred-ninety sixth chapter of the Kaguya-sama wa Kokurasetai manga series.

Maki, Miyuki, Ai, and Yu hang out at the batting cages for an afternoon.

The chapter shows Miyuki, Hayasaka, Maki & Ishigami hanging out after valentines day. We start off by seeing Maki interacting with Miyuki & Ishigami. Maki acts comically by saying something gravely serious at first and then switching to a “kawaii” mode. Upon being asked why Maki is here, she replies that she wants to play something with them.

They are on their way to the arcade, but run into Hayasaka. Since the termination of the employment contract between Hayasaka & Kaguya is fairly recent, she has to remind Mika that she is no longer employed by Kaguya.

The trio invites Hayasaka out, who suggests that they go to the Batting Center. After a few practice rounds, it becomes clear that Hayasaka and Maki are great at the sport, while Miyuki & Ishigami are not. They pair up into groups of 2 – Hayasaka & Miyuki vs Maki & Ishigami. They decide that the winner will be treated to drinks by the loser.

Hayasaka wins by 1 point, and forms a friendship with Maki. The chapter ends with Hayasaka forming a bond with Maki, who seems increasingly similar to Kaguya.